skip to main | skip to sidebar

My Dream Holiday to Nauru Island by Pares L.Wenda

I decided to visit Nauru Island because I want know more about all the cultures in this island. Nauru is the best island to visit. However I’m going to the island while doing research for the tribes who live there, I will also do other activities. In Nauru Island there are three tribes. They were Polynesians, Melanesians, and Micronesians. It is interesting to do research. I want to know everything about which languages they use more Polynesian, Melanesian or Micronesian because three of cultures are different but they live in same island. Also I’m going to study Nauru Language (Kind of National Language). And also I’m going to see traditional music, I’m going to see how to cook traditional food, I’m going to visit a language museum near town.

I’m going to do other activities like surfing, jet skiing, windsurfing, water skiing, wake boarding, and body boarding. And also I’m going to relax while reading some books and lying down on the sand if I get free times. There are lots of activities to do when I come to the island. I’m going to the island in September is a best one to go there because the weather is summer, dry, wind and little bit rain. Temperatures has max 85 F* to 31*C. and minimum 74F* to 25C*. An average wind speed has 8 to 12 km/h. It can better to do my research when I come in September next year. I’m going to the island by plane.

Finally, I’m going to the island. It is interesting experience because I never been there before. So when I get a holiday in September next year I’ll try to go there.

His name was Kiloner Wenda, I met him when I was studying at university in Malang. Actually he and I were from Wamena but different village and I never met him when I was a child. After I finished my elementary school in 1990 and I went to Jayapura. I finished my senior high school and left in 1996. I went to East Java and studied at Merdeka University Malang. I studied at Economics Development in Economics Faculty. My friend finished his elementary to senior high school in our town and left in 1996 and went to Malang. He finished his studying at Wisnu Wardanah University. His major was technical engineering and finished in 2002. So, he worked in a church foundation.

Why? I said he is my best friend! I have several reasons. First when I was sick in 1997 and went to hospital in Malang he always visited me. That time, I had a lung problem and the doctor predicted that I would die but he always told me not to warry about it. God was going to help you. You must trust the Lord and also trust me and trust yourself that you were going to recover. I really knew all my friends prayed for me when I went to hospital until I left. So I was still in hospital one week before I got out from there.
Second, he always helped me every time I want to do something and so do I. When I got married he gave something and I never forget it. I still remember now and the next time. Maybe when he got married I’m going to help him as he helped me before, As he worked in foundation church and so did I. Before I came here, we always worked and went to countryside to do something together.

I enjoy working with him because he was a man who worked hard and also very discipline.
Diposting oleh PARES L. WENDA di 20.18 Tidak ada komentar:

I HAVE A DREAM

I have a dream one day. I’m going to be a business because I love working in a company and to earn a lot of money. I’m going to decide to get a small business and become an owner of a business. When I’m 40 years old I’ll become a rich man so I can help my children by giving good education, buying a new house, new car probably. I’ll go round the world on holiday with my family or my relatives. It will be nice, I think.

I will help the poor people in my country. It’s very nice if I’ll do something when I because a rich man. I hope my children will get some good jobs. It can be helpful for their life. So now I’ll prepare to study abroad. I’m going to study there, after that I’ll be back in my town and start to reach my dream. I can’t try to do that now but I can keep trying. If I do this and success, I think many people in my town will know, who I am and what I’m doing there. I hope I’ll be able to do that because for a long time I’m going to do it. ®

2) I think you should stop smoking because it’s not good for your body. If you stop, it’ll improve your health and do exercise each morning or afternoon after finish working. And if you want to live long you should do my suggestion.

3) I think every year you always are busy so I suggest that you should do checkup yearly. So why it is good for you? Because you’ll know progress of your health. And I hope you should have an advice doctor. And when you have a free time you call him to help you.

5) I think you should drink at least 1.5 liters of water each day. Why? Because 90% our body consists of water so if you don’t drink each day like this, you can be sick in parts of your body. So if you never drink like this. I hope you should do it now and it’ll become a good habit in your life.

6) I think you should avoid stress by balancing work and play. Work hard it’ll be better but work hard and without play or rest is not good for your life. So, I hope you’ll be balanced between work and play. If you work hard, don’t forget to eat on time and drink lots of water and eat some fruits. It’ll be fresh and also rest a lot. It should recovery your body and it helps you to work the next day. But it’ll be better if you have a free time and do exercise or do anything you want. It can be good to avoid stress from your job.

7) I think you should start doing a relaxing exercise like yoga or tai chi. Why you should do yoga or tai chi? Because if you are 60 years old, you’ll find many problem in your life, if you don’t do exercise like that. So, I want to suggest you, every day you should do one of them. It’ll be good if you do exercise in the morning at sunrise and in the afternoon on sunset. I know, you don’t do anything now, because you are retired from your job, so now you have many times to do exercise. It’ll help you and you’ll have got good life and live long in the world.

9) I think you should take vitamin supplement tablets each day. It can be good, because when you work hard and you don’t eat something, supplement will help you. I want to suggest you before you buy. You should buy supplement of product high desert. High-desert is kind of product honey bee pollen from the desert. So the product, they call high desert is company of the United States. It’ll be better when you work hard and take it. The important of this supplement for your life is all your disease it’ll save you and you have lots of energy to work.

We thank you first for all the messages of support from around the world
surrounding the recent launch of the International Parliamentarians for West
Papua. The launch took place in the Houses of Parliament, London on 15th October, and
laid down the foundations towards international action against the continuing
illegal occupation of West Papua by Indonesia. A new website will shortly be
launched giving regularly updated information on developments with the
International Parliamentarians for West Papua.


Since the launch of the International Parliamentarians in London, thousands of
West Papuans have been staging regular demonstrations in West Papua calling for
their freedom and for the international community to act. Indonesia's response
has been to send over 10,000 more troops to West Papua in an attempt to
suppress and intimidate West Papuans.

This is a crucial time in West Papua's history. Please contact your local or
national news organisation asking them to give coverage to the unfolding events
there. (contacts for UK media organisations are at the bottom of this email)

1st December is West Papua independence day; the day West Papua was granted its
independence by the Dutch following the end of their colonial rule, and before
Indonesia invaded.


In London we will be holding a vigil outside the Indonesian Embassy from midday
on Monday 1st December. Later in the afternoon we will also be visiting the
headquarters of Rio Tinto and BP, whose plants continue to cause widespread
environmental and human destruction in West Papua. Please come and join exiled
independence leader Benny Wenda and other supporters as we celebrate the spirit
of the Papuan people on this day in their struggle for freedom.


For those of you in other parts of the world, please show your solidarity with
an embassy vigil outside the Indonesian Embassy in the country that you live
in.

Benny and Maria Wenda (The Lani Singers) release their debut album 'Ninalik
Ndawi' on 10th November. Deeply emotive, their songs are rooted in the sacred
rituals of the Lani tribe, from the highland region of West Papua. The songs
also embody a powerful modern day message of their peoples struggle for
freedom.

Benny and Maria will be doing a live session and interview on the 'World In
London' show on BBC Radio London on 8th November, following on from session
they performed on BBC Radio 3 last month.


Once again, thanks for your continued support of the campaign. Huge strides are
being made in West Papua's journey towards freedom. It is through the support
of our grassroots supporters that this campaign continues to grow and evolve so
rapidly. 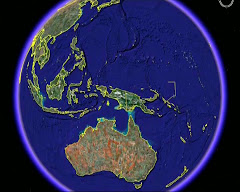 The traditinal cook in Papua highland 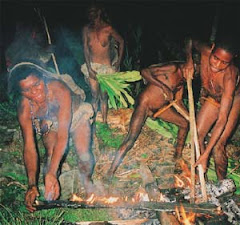 They are cooking a barapen 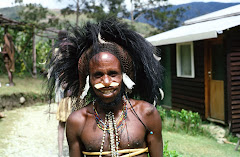 The big man of the Papua Highland 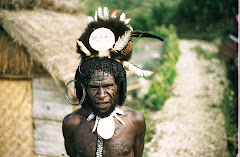 They are big men of the highland Papua

The white man with some people of the Papua highland 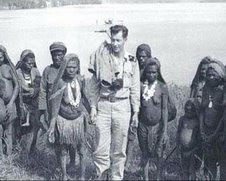